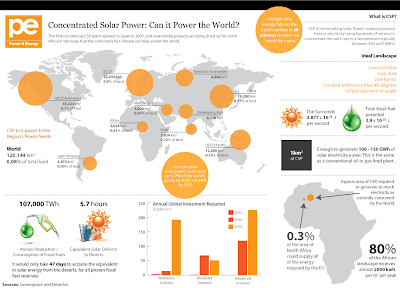 CSN Editor: Click here for an expanded view of the above image.
Posted by War News Updates Editor at 8:30 AM 5 comments: 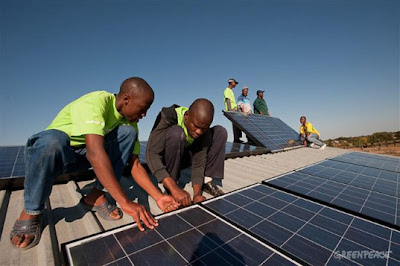 UN Plans Solar Energy For 33 Million People In Africa, Asia -- M&C
New York - Low-cost solar panels and solar batteries will be provided to poor communities in 14 countries in Africa and Asia in the next four years, the UN Development Programme said Thursday.

A total of 33 million people in the 14 countries will be able to make use of solar energy for commercial businesses and economic development, using the solar panels to be developed by a Mauritius-based company called ToughStuff, UNDP said.

My Comment: Africa has the sun .... especially in the Sahara regions.
Posted by War News Updates Editor at 8:00 AM 1 comment:

Marines In Afghanistan Are Getting Use To Using Solar Panels

Marines With ExFOB Marines and sailors of India Company, 3rd Battalion, 5th Marine Regiment pose with their Afghan national army counterparts in front of a solar power generator at Patrol Base Sparks, in Sangin District, Afghanistan. Photo by Gunnery Sgt. William Price/USMC
Marines in Afghanistan Find That Solar Panels Save Soldiers' Lives -- Popular Science
A battalion of Marines in Afghanistan is going green, using solar panels to reduce their energy consumption and thereby reduce the things they carry — and even save lives.

The Marines and sailors of 3rd Battalion, 5th Marine Regiment arrived last October at Forward Operating Base Jackson, outside Sangin, Afghanistan, with an array of solar equipment. The battalion’s generators typically use more than 20 gallons of fuel a day, but the Marines have cut that to 2.5 gallons a day, according to Staff Sgt. David Doty, who maintains the gear.

My Comment: I just hope that they do not get cloudy days for a long period of time.
Posted by War News Updates Editor at 12:00 PM No comments:

Where Are The Solar Power Projects?

Electric towers and power lines cross the proposed site of a BrightSource Energy solar plant near Primm, Nev. The presence of existing towers make the area a prime site for solar development.
From Watts Up With That?:

From the Ventura County Star:

ROACH DRY LAKE, Nev. — Not a light bulb’s worth of solar electricity has been produced on the millions of acres of public desert set aside for it. Not one project to build glimmering solar farms has even broken ground.

Instead, five years after federal land managers opened up stretches of the Southwest to developers, vast tracts still sit idle.

My Comment: A blunt and accurate assessment on the politics behind solar power.
Posted by War News Updates Editor at 7:00 PM No comments: 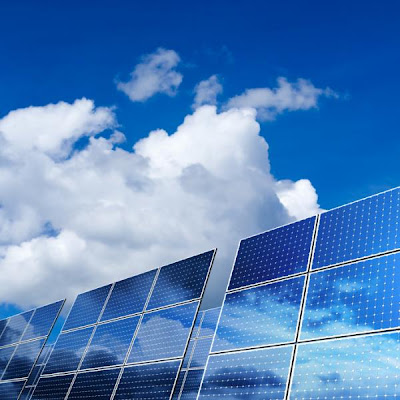 Researchers have come up with solutions for two problems that, for the last twenty years, have been hampering the development of efficient and affordable solar cells. (Credit: iStockphoto/Kyu Oh)
From Science Daily:

ScienceDaily (Apr. 12, 2010) — Thanks to two technologies developed by Professor Benoît Marsan and his team at the Université du Québec à Montréal (UQAM) Chemistry Department, the scientific and commercial future of solar cells could be totally transformed. Professor Marsan has come up with solutions for two problems that, for the last twenty years, have been hampering the development of efficient and affordable solar cells.

Representative thin crystalline-silicon photovoltaic cells -- these are from 14 to 20 micrometers thick and 0.25 to 1 millimeter across. (Credit: Image by Murat Okandan)
From Science Daily:

The tiny cells could turn a person into a walking solar battery charger if they were fastened to flexible substrates molded around unusual shapes, such as clothing. 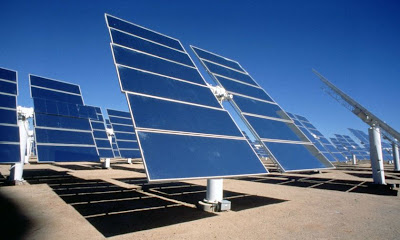 The cost of solar panels dropped almost in half in the last year in Germany.

In the last year — solar panel prices dropped to $2.10 a watt from about $4.10 in Germany — and only about half the global manufacturing capacity is being used, said Steve O'Rouke, an analyst with Deutsche Bank.

"We've seen an awful lot of angst and difficulty," O'Rouke said. "You have to expect some companies to go out of business."

Deutsche Bank is forecasting a structural over-supply in the market until at least 2011.

Students Build The Solar Homes Of The Future

For the Solar Decathlon, 20 teams of college students strive to build the most technologically savvy sun-powered house. For two weeks in October their homes go head to head in a contest to consume the least energy.

On a hot and bright California day, the red steel frame of a half-built house, its footprint a jagged stamp on the landscape, glints in the sunshine beaming down on Santa Clara University. Crawling around the crescent-shaped structure, workers holler measurements, fasten sheathing and snap chalk lines. They’re wearing hard hats and tool belts, and the noise of steel swatting plywood sounds unmistakably like a job site. But this is hardly a construction crew out of central casting.

Nanosolar's new factory could help lower the price of solar power, if the market cooperates.

A promising type of solar-power technology has moved a step closer to mass production. Nanosolar, based in San Jose, CA, has opened an automated facility for manufacturing its solar panels, which are made by printing a semiconductor material called CIGS on aluminum foil. The manufacturing facility is located in Germany, where government incentives have created a large market for solar panels. Nanosolar has the potential to make 640 megawatts' worth of solar panels there every year.

Photo: Light trap: Incoming light reflects off grooves in a silver band and is redirected along a glass cover. This light, which is usually lost, can then be absorbed by the solar cell. The grooved band is one of three improvements that could significantly lower the cost of making solar power. Credit: Technology Review

Improvements to conventional solar cell manufacturing that could significantly increase the efficiency of multicrystalline silicon cells and bring down the cost of solar power by about 20 percent have been announced by startup 1366 Technologies of Lexington, MA.

Lower-cost Solar Cells To Be Printed Like Newspaper, Painted On Rooftops

Researchers apply the nanoparticle “inks” as a spray on the solar cells.
(Credit: Image courtesy of University of Texas at Austin)
From Science Daily:

ScienceDaily (Aug. 25, 2009) — Solar cells could soon be produced more cheaply using nanoparticle “inks” that allow them to be printed like newspaper or painted onto the sides of buildings or rooftops to absorb electricity-producing sunlight.

Brian Korgel, a University of Texas at Austin chemical engineer, is hoping to cut costs to one-tenth of their current price by replacing the standard manufacturing process for solar cells – gas-phase deposition in a vacuum chamber, which requires high temperatures and is relatively expensive.

Fifteen of these flower-shaped solar panels were installed last month in an open space between a highway and a retail lot in Austin, Texas. They not only provide a green source of energy, but also bring a fresh look to solar panel design. Unfortunately, I can't help but think of those fake-tree cellphone towers when I see these things.

Designed by Massachusetts art duo Harries/Heder, the SunFlowers are an art exhibit at heart, and stand over 30 feet tall. They collect power from the sun by day, and use that energy to power their blue LEDs at night. Up to 15 kilowatts of surplus power is sent back to the grid as payment for any maintenance fees the SunFlowers incur.

A man pictured next to solar panels whose energy helps pump water into a water tower in a village in Niger, 2004. Twelve European companies launched a 400-billion-euro (560-billion-dollar) initiative on Monday to plant huge solar farms in Africa and the Middle East to produce energy for Europe. (AFP/File/Issouf Sanogo)
From Yahoo News/AFP:

The consortium says the massive proposal could provide up to 15 percent of Europe's electricity needs by 2050.

Engineering giants ABB and Siemens, energy groups E.ON and RWE and financial institutions Deutsche Bank and Munich Re are among the companies which signed a protocol in Munich.

ScienceDaily (June 8, 2009) — A transparent thin film barrier used to protect flat panel TVs from moisture could become the basis for flexible solar panels that would be installed on roofs like shingles.

The flexible rooftop solar panels - called building-integrated photovoltaics, or BIPVs - could replace today's boxy solar panels that are made with rigid glass or silicon and mounted on thick metal frames. The flexible solar shingles would be less expensive to install than current panels and made to last 25 years. Solar thermal converts the sun's energy to heat and then to electricity (Source: NREL)
From ABC News Science (Australia):

Solar thermal power has the potential to generate up to a quarter of the world's electricity by 2050, according to a new report by pro-solar groups.

"Solar power plants are the next big thing in renewable energy," says Sven Teske of Greenpeace International and co-author of the report.

A Potential Breakthrough In Harnessing the Sun’s Energy 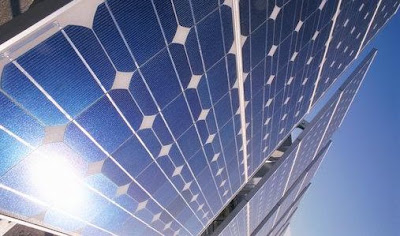 New solar thermal technology overcomes a major challenge facing solar power – how to store the sun’s heat for use at night or on a rainy day. As researchers tout its promise, solar thermal plants are under construction or planned from Spain to Australia to the American Southwest.

In the high desert of southern Spain, not far from Granada, the Mediterranean sun bounces off large arrays of precisely curved mirrors that cover an area as large as 70 soccer fields. These parabolic troughs follow the arc of the sun as it moves across the sky, concentrating the sun’s rays onto pipes filled with a synthetic oil that can be heated to 750 degrees Fahrenheit. That super-heated oil is used to boil water to power steam turbines, or to pump excess heat into vats of salts, turning them a molten, lava-like consistency.

Image: Powerful polymers: This illustration shows the different layers that make up a new plastic solar cell with nearly perfect internal efficiency. From bottom to top, the layers are glass, a transparent electrode, two polymer layers, a titanium oxide layer that redistributes light, and an aluminum electrode. Credit: Nature Photonics

Utility to buy orbit-generated electricity from Solaren in 2016, at no risk.

California's biggest energy utility announced a deal Monday to purchase 200 megawatts of electricity from a startup company that plans to beam the power down to Earth from outer space, beginning in 2016.

San Francisco-based Pacific Gas & Electric said it was seeking approval from state regulators for an agreement to purchase power over a 15-year period from Solaren Corp., an 8-year-old company based in Manhattan Beach, Calif. The agreement was first reported in a posting to Next100, a Weblog produced by PG&E.

I have written beffore about the reduction in price of solar energy, and how each succcessive price decline would deliver a new generation of adoption. Now, we can examine some of the specfic technologies that are driving the race to affordability, and will enable solar energy to be one of the only candidate technologies to lead an economic recovery from the present downturn.

Popular Mechanics has a roundup of five new areas of innovation in harnessing energy from the Sun. All five promise to make solar energy competitive with the cheapest sources of fossil-fuel energy, and many of these five technologies could work in combination with each other. The five technologies are the following :

The amount of energy from the sun that falls on Earth is staggering. Averaged over the entire surface of the planet, roughly each square yard collects nearly as much energy each year as you’d get from burning a barrel of oil. Solar farms seek to harness this energy for megawatts of power.