Quartz: There are now more $100 bills than $1 bills in the world

A funny thing happened on the way to a world of cryptocurrencies and mobile payments. Cash became more popular than ever. The main reason? The one hundred dollar bill.

In 2017, for the first time ever, the one hundred dollar bill became the most popular US bill in circulation, beating out the one dollar bill. It is quite the turn of events for Benjamin Franklin-faced banknote. Just 10 years ago, it was less common than both the $20 and the $1.

The share of US dollars in circulation as a share of GDP rose from about 6% in 2010 to 9% in 2018, according to the Federal Reserve. Increased use of $100 bills has been the primary driver.

WNU Editor: A one dollar bill does not buy much in today's world.
Posted by War News Updates Editor at 12:00 PM No comments: 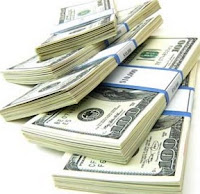 STOCKHOLM — Parishioners text tithes to their churches. Homeless street vendors carry mobile credit-card readers. Even the Abba Museum, despite being a shrine to the 1970s pop group that wrote “Money, Money, Money,” considers cash so last-century that it does not accept bills and coins.

Few places are tilting toward a cashless future as quickly as Sweden, which has become hooked on the convenience of paying by app and plastic.

This tech-forward country, home to the music streaming service Spotify and the maker of the Candy Crush mobile games, has been lured by the innovations that make digital payments easier. It is also a practical matter, as many of the country’s banks no longer accept or dispense cash.

At the Abba Museum, “we don’t want to be behind the times by taking cash while cash is dying out,” said Bjorn Ulvaeus, a former Abba member who has leveraged the band’s legacy into a sprawling business empire, including the museum.

CSN Editor: Being one who grew up appreciating cash .... this is one trend that this old editor is going to have trouble accepting.
Posted by War News Updates Editor at 9:00 AM No comments:

Canada To Have It's Own Crypto-Currency

Canada To Mint Its Own Crypto-Currency -- Technology Review
The Royal Canadian Mint has invented a new, digital currency called MintChip intended to be an alternative to using debit and credit cards.

MintChip is modeled somewhat on Bitcoin, a digital currency invented by an unknown programmer that looked like it might succeed last year before falling prey to a serious of security and regulatory problems. The promo video for MintChip promises that transactions as small as $0.01 will be possible, something not feasible with credit cards due to the fees on each transaction. A competition is underway that will reward programmers with the best demonstration uses for MintChip.

Read more ....
My Comment: More news on this currency can be read here.
Posted by War News Updates Editor at 5:00 AM No comments:

Is Your Next Credit Card Your Cell Phone?

Get ready to retire that worn leather wallet. If some of the country's biggest tech companies have their way, all the plastic cards crammed into your billfold will soon find their way into your phone.

Apple is planning to introduce a service that would let consumers use their iPhones and iPads to purchase products, essentially turning a user's cell phone into a credit or debit card, according to a Bloomberg report.

Money Can Buy You Happiness – Up To A Point 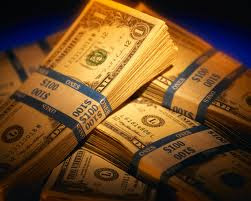 CAN money buy you happiness? The answer, it appears, depends on what you mean by "happiness". High earners are generally more satisfied with their lives, it seems, but a person's day-to-day emotional wellbeing is only influenced by money up to a certain point.

New Benjamin A founding father gets a new look on the new $100 bill U.S. Treasury
From Popular Science:

Fun 3-D holograms give Mr. Ben Franklin a facelift for the new decade.

A running battle between the U.S. Treasury and the counterfeiting efforts of drug lords and North Korea just got even more high-tech, with 3-D interactivity. Now everyone can check the authenticity of their Benjamins, courtesy of color-changing and moving images of bells and numbers.

Money DOES Buy You Happiness... If your Friends Have Less Of It Happy: But money counts for little unless you are richer than your friends
From The Daily Mail:

Money makes you happy - but only if you have lots more than your friends and neighbours.

Owning the house of your dreams, the car you always longed for and having millions in the bank doesn't stop that desire to keep up with the Joneses, researchers have found.

And if the Joneses have more than you do, you'll be miserable.

It seems envy at being lower in the social pecking order tarnishes the satisfaction of being well off.

The Future Of Money: It’s Flexible, Frictionless And (Almost) Free 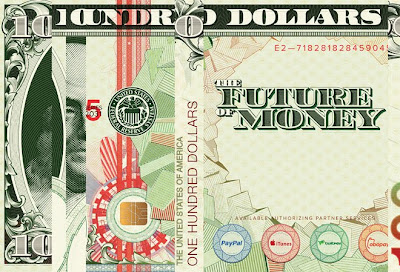 A simple typo gave Michael Ivey the idea for his company. One day in the fall of 2008, Ivey’s wife, using her pink RAZR phone, sent him a note via Twitter. But instead of typing the letter d at the beginning of the tweet — which would have sent the note as a direct message, a private note just for Ivey — she hit p. It could have been an embarrassing snafu, but instead it sparked a brainstorm. That’s how you should pay people, Ivey publicly replied. Ivey’s friends quickly jumped into the conversation, enthusiastically endorsing the idea. Ivey, a computer programmer based in Alabama, began wondering if he and his wife hadn’t hit on something: What if people could transfer money over Twitter for next to nothing, simply by typing a username and a dollar amount? 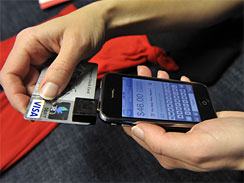 Photo: Willo O'Brien, a designer and illustrator, demonstrates Square on her iPhone in San Francisco, Dec. 18, 2009. (AP Photo/Russel A. Daniels)

Square's First Product Is Tiny Credit Card Terminal that Plugs into an iPhone.

Dorsey is leading a new startup called Square. Its first product resembles a cube: a tiny credit card terminal that plugs into the headphone jack of an iPhone. The goal is to make it easier to complete a credit card transaction, whether you're a street vendor selling T-shirts or an individual settling a lunch tab with a friend. 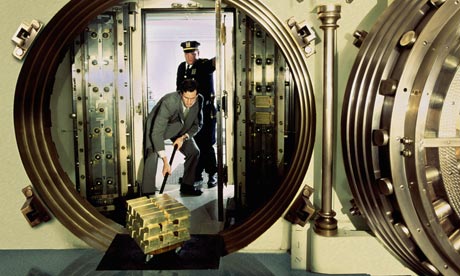 Without the gold standard, argues consultant Dave Birch, pounds are no more real than World of Warcraft gold. Photograph: Getty Images
From The Guardian:

Money. The stuff that makes the world go round. Every day we earn it, spend it, exchange it and lose it. But you won't find any Linden dollars, Eve ISK or Facebook credits down the back of the couch.

Virtual currencies like these are used for transactions in online worlds and social networking sites. While real-world currencies are on the slide, many virtual ones are going from strength to strength. In the second quarter of the year the equivalent of $144m (£91m) was traded on the LindeX, the official currency exchange of Second Life, where residents buy and sell Linden dollars for their US counterpart – a 20% increase on the previous quarter, while the US economy shrank by 1%. Trading activity increased by 6% in the last quarter of 2008.

Out of Thin Air: How Money is Really Made

Newer bills cary security threads, color-shifting ink and watermarks. None of that insures the money will grow, however. For that, you need lots of lending and even more faith.
From Live Science:

Making money in 2008 looks like a grim proposition, but not because U.S. government printing presses can't create enough dollar bills.

The U.S. Bureau of Engraving and Printing (whose web site name perhaps says it all: moneyfactory.gov) churns out about 38 million bills of varying denominations daily, all worth $750 million in face value. Facilities in Fort Worth, Texas and Washington D.C. use 18 tons of ink per day to keep up.

Yet 95 percent of fresh notes simply replace those already in circulation. Common $1 bills last about 21 months, while a $100 bill can go for roughly 7.4 years before requiring replacement. Taken all together, these physical bills represent just a drop in the bucket of global money.