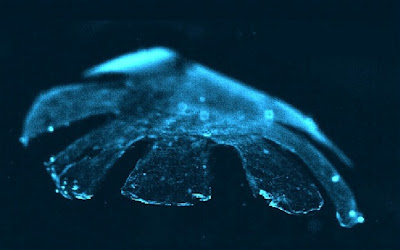 The silicon jellyfish can mimic swimming movements thanks to muscle cells from rat hearts implanted onto it. Photo: Harvard University and Caltech
Artificial Jellyfish Created In Lab From Rat Cells -- The Telegraph
An artificial jellyfish which is able to swim with the help of beating heart muscle cells has been created by scientists.

The tentacled artificial creature, made from silicon, has been dubbed "Medusoid" because of its resemblance to the snake-haired character from Greek mythology whose gaze turned people to stone.

It is able to mimic the swimming movement of a jellyfish thanks to muscle cells from rat hearts which were implanted onto its silicon frame and grown into a pattern similar to the muscles of a real jellyfish.

By applying an electric current to a container of conducting liquid, the scientists demonstrated they could "shock" the muscles into contracting so that it began to move through the water. Breakthrough: New DNA was protected by a process called methylation (step 5)
From The Daily Mail:

Scientists are only months away from creating artificial life, it was claimed today.

Dr Craig Venter – one of the world’s most famous and controversial biologists – said his U.S. researchers have overcome one of the last big hurdles to making a synthetic organism.

The first artificial lifeform is likely to be a simple man-made bacterium that proves that the technology can work.

A self-assembling molecule synthesized in a laboratory may resemble the earliest form of information-carrying biological material, a transitional stage between lifeless chemicals and the complex genetic architectures of life.

Called tPNA, short for thioester peptide nucleic acids, the molecules spontaneously mimic the shape of DNA and RNA when mixed together. Left on their own, they gather in shape-shifting strands that morph into stable configurations.

The molecules haven’t yet achieved self-replication, the ultimate benchmark of life, but they hint at it. Best of all, their activities require no enzymes — molecules that facilitate chemical reactions, but didn’t yet exist in the primordial world modeled by scientists seeking insight into life’s murky origins. 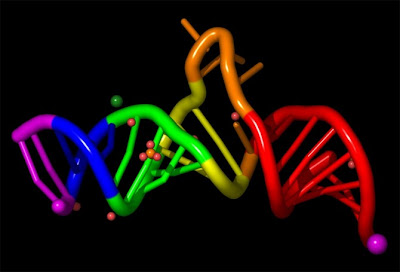 A fundamental but elusive step in the early evolution of life
on Earth has been replicated in a laboratory.
From Wired Science:

Researchers synthesized the basic ingredients of RNA, a molecule from which the simplest self-replicating structures are made. Until now, they couldn’t explain how these ingredients might have formed.

“It’s like molecular choreography, where the molecules choreograph their own behavior,” said organic chemist John Sutherland of the University of Manchester, co-author of a study in Nature Wednesday.

Artificial Life 'Could Be Created Within Five Years'

Prof David Dreamer believes building a new lifeform from scratch is a daunting task but is confident it could happen in five to 10 years Photo: GETTY
From The Telegraph:

Artificial life could be created "within five years", researchers from the USA have claimed.

Laboratories across the world are closing in on a "second genesis" - an achievement that would be one of the greatest scientific breakthroughs of all time.

Prof David Deamer, from California University, said although building a new lifeform from scratch is a daunting task he is confident it can happen in five to 10 years.