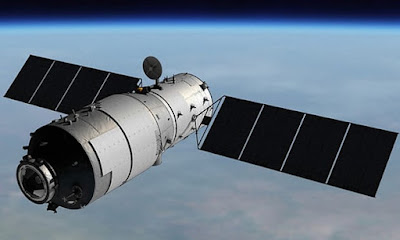 China Aims For The Moon 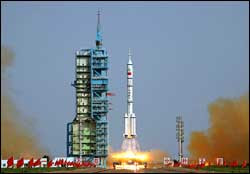 China To Attempt First Moon Landing -- The Telegraph
China will next year attempt to land an exploratory craft on the moon for the first time, state media reported, in the latest project in its ambitious space programme.

China's third lunar probe will blast off in the second half of 2013, the state Xinhua news agency reported late on Monday. Other reports said it would land and transmit back a survey of the moon's surface.

If successful, the landing would be China's first on the lunar surface and mark a new milestone in its space development. It is part of a project to orbit, land on and return from the moon, Xinhua said.

China said in its last white paper on space it was working towards landing a man on the moon, although it has not given a time frame.

My Comment: They are being aggressive in their space program .... reminds me of what NASA was like 40 years ago.
Posted by War News Updates Editor at 3:00 AM No comments: 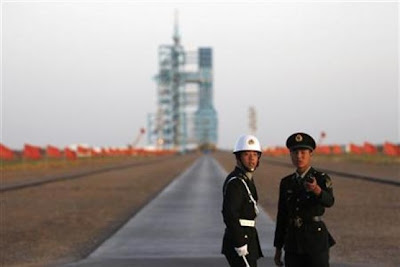 China's military is rapidly boosting its space programs to advance Communist Party interests "and defend against perceived challenges to sovereignty and territorial integrity," said the 84-page report by the Project 2049 Institute, a research group on Asia-Pacific security issues.

My Comment: On the same day that this report on China's growing space program was released, America's space program decline was there for all to see.
Posted by War News Updates Editor at 6:00 PM No comments:

The Rapid Rise Of China As A Space Power

A Delta II rocket launch. Photo: Air Force
China Now Tops U.S. in Space Launches -- Danger Room
For the first time ever, China has launched more rockets into orbit in a year than the U.S. In 2011, the Chinese sent 19 rockets into space. The U.S. sent just 18. Russia, the Walmart of space launches, fired off no fewer than 31 rockets.

The numbers, parsed in recent reports from the U.S. Federal Aviation Administration and the nonprofit Space Foundation, might seem to herald America’s orbital decline relative to its most bitter rival. In terms of sheer numbers of rocket launches, China has been steadily catching up to America for several years. In 2010, China fired off 15 rockets, matching the U.S. for the first time.

Read more ....
My Comment: The trend is for China to surpass even Russia within the next 5-10 years.
Posted by War News Updates Editor at 4:00 PM 1 comment:

China 'To Send Its First Woman Into Space'

The Long March rocket carrying the unmanned spacecraft Shenzhou 8 blasts off from the launch pad at the Jiuquan Satellite Launch Centre Photo: REUTERS
China 'To Send Its First Woman Into Space' -- The Telegraph
China may send its first woman into space this year after including female astronauts in the team training for its first manned space docking, state media said on Monday.

Three astronauts will blast off on board Shenzhou ("Divine Vessel") IX between June and August to conduct a manual docking with the Tiangong-1 module currently orbiting the Earth, Xinhua news agency said, quoting an official with China's manned space programme.

A team of astronauts, including an unspecified number of women, are training for the docking mission and the three-person crew will be selected at the last minute, said Niu Hongguang, deputy commander-in-chief.

After the space rendezvous, the astronauts will move temporarily into Tiangong-1 ("Heavenly Palace"), where they will perform scientific experiments.

Read more ....
My Comment: What took them so long?
Posted by War News Updates Editor at 8:00 AM No comments:

A Chinese rocket carrying a probe destined for the Moon has blasted into space.

A Long March 3C rocket with the Chang'e-2 probe took off from Xichang launch centre at about 1100 GMT.

The rocket will shoot the craft into the trans-lunar orbit, after which the satellite is expected to reach the Moon in about five days.

Chang'e-2 will be used to test key technologies and collect data for future landings.

The timetable for China's first manned moon landing, as well as the launch of a space station, lab and probes to explore Mars and Venus, was announced by scientists over the weekend.

Chinese analysts, however, dismissed international concerns that Beijing is engaging in an outer-space arms race, stressing that recent activities and future missions are for scientific purposes and for the benefit of mankind.

China's Moon Rocket May Take A Cue From The Saturn V

Saturn V A behemoth rocket to reach the moon NASA
From Popular Science:

My rocket is almost as big as your rocket.

China's new moon rocket design is in the class of the old Saturn V that once launched U.S. Apollo astronauts to the moon. The China Academy of Launch Vehicle Technology says that the proposed rocket would have a thrust of 3,000 metric tons, just shy of the 3,470 metric tons of thrust generated by the Saturn V's first stage, Aviation Week reports.

Qian Xuesen has died at 98; he helped found Caltech's Jet Propulsion Laboratory before being deported as a suspected Communist.

One can only imagine how history might have played out if the United States had not deported a Chinese-born Caltech rocket scientist on suspicion of being a Communist in 1955. Qian Xuesen first fought his deportation, but later accepted his fate and went on to become the founder of China's missile and space programs. His death this past Sunday comes as China broadens its space exploration efforts to become a potential challenger to a troubled U.S. space program, or perhaps a partner.

MOSCOW. (RIA Novosti commentator Alexander Peslyak) - The launch of a Russian Phobos Grunt probe to Mars on October 16 has been delayed until 2011.

China Says Will Push Space Programme To Catch Up West

China said Thursday its rapidly growing space programme was the crowning achievement of the nation's high-tech transformation and pledged to continue to develop it to close the gap with Western countries.

"I believe a space programme represents a country's high technology and I believe China has already become a major country in high technology," Vice Minister of Science and Technology Li Xueyong told reporters.

"Our success shows not only the progress of the space programme but also our overall level of science and technology," he said at a press briefing.

Chinese astronauts at the Jiuquan Satellite Launch Centre in a remote desert area of northwest China's Gansu province. The country has begun construction of its fourth space launch centre as the nation gears up for future manned space flights aboard a new generation of carrier rockets, state media has reported. (AFP/Xinhua/File)
From Yahoo News/AFP:

BEIJING (AFP) – China on Monday began the construction of its fourth space launch centre as the nation gears up for future manned space flights aboard a new generation of carrier rockets, state media reported.

China's space programme is run by the nation's military.

China's first satellite to probe Mars has been transported to Russia for a launch later this year, state media reported Thursday.

Yinghuo-1, the 110-kilogramme (242-pound) Chinese satellite, is scheduled to be launched along with Russia's "Phobos Explorer" aboard a Zenit rocket in October after final testing, the Beijing News said.

After entering Mars' orbit -- 10 to 11 months later -- the orbiter will probe the Martian space environment, with a special focus on what happened to the water that appears to have once been abundant on the planet's surface.